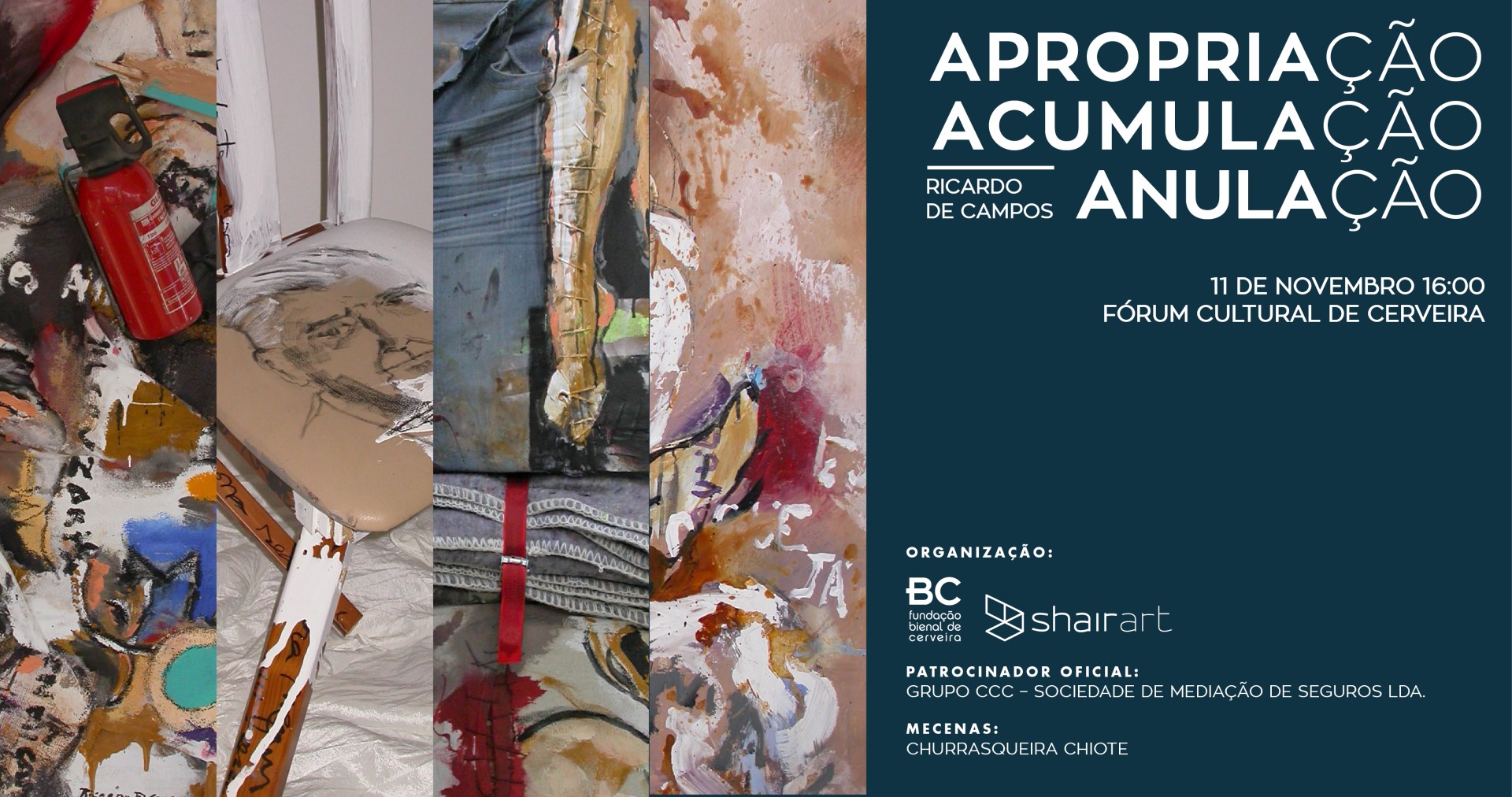 In the year he marks 40 years of age, Ricardo de Campos (n.1977) goes through my curatorial universe three times. The first, in February, with an individual showcase at Porto, where he literally appropriated a warehouse filled with the human accumulation excess, in a postmodern context, to create the new, without withdraw himself from its neoexpressionist tendency language, figurative of social and political connotation. In this same exhibition, he presented himself in a performative attitude, placing in the public the possibility of cancel the artist’s identity by using his material of expression, that is, the ink. The proposal was conceptually strong, impacting, as it seemed to me from day one: this artist’s painting was strong and impressive.

For the construction of this first experience of visual sharing, Ricardo de Campos’s work procedural dimension’s apprehension was fundamental, which, in general terms, could be said to be part of a generational tendency to the artwork and its traditional supports desacralization, using as visual material the everyday waste and creating the imaginary chaos, though of compositional balance, from an idea of ​​collective experience in which we do not have the opportunity to segment and divide our ability to see the world. Everything is an image. Everything calls us to a subjective existence that is based on the possession, not only of goods, but of the other.

In an interview with the Argentinean newspaper La Nacion, published on April 26, 2015, Boris Groys (n.1947), in a line of thought heir to Zygmunt Bauman’s (1925-2017), transmuted to the sociology of culture and to the practical dimension of the exhibition of what contemporary artistic and cultural practices are, alerts us to a reflection on 21st century phenomena that seem to us totally new but, in fact, are in parallel with the second half of the nineteenth century, highlighted in both periods a policy of opening of markets, growing capitalism, culture of fame, the return of religious strength, terrorism and counterterrorism. Necessarily, Ricardo de Campos’s work intertwines with Groys’ concerns and is the consequence of a time and was the way the artist interpreted it, how he reacted to its context, which first interested me. As a result of the financial crisis of 2008, which struck the ordinary citizen as a pandemic, and unable (nor unwilling) to counteract its creative impetus, Ricardo de Campos looked around and turned everything into basis: linen and linen sheets, chipboard, MDF boards, fishing nets. Matter grew in relation to the dimension of vulgar and vernacular domestic and, visually, the painting has been textured of stories, messages, symbols and truths. Quickly, Ricardo de Campos had to overcome the barrier of painting and embraces the object and the installation. Art frees itself from its modern and traditional space and seizes the forefront, in line with the first revolutionary practices of the 1960s, marked by pop art, conceptual and minimal. Arthur Danto (1924-2013) wrote greatly about this space of art, which ceases to be art and walks towards its end, in a philosophical sense, and the reading of “The End of Art” (1964) is mandatory for the understanding the contemporary phenomena.

The vision I came to not only formulated a temporary definition of art, it also formulated the approach I was assuming in art criticism. In the first instance, an artwork has to be about something – have a meaning – and somehow has to incorporate the meaning in the way it presents itself to the viewer’s consciousness. I transformed this slogan by saying that artworks are embodied meanings. 1

It is of incorporated meanings, in a logic of circular and free integration, that we talk about when it comes to Ricardo de Campos’s work and, nonetheless, of other artists with whom he shares generation. Going back to February and making the analogy to November’s time in which we meet again, without ever losing sight of each other, I can state that in the space of almost a year Ricardo de Campos has freed himself from his inner space, of his zone of comfort, of his domestic geography, venturing in a way in which he added to the distortion of the traditional support of the artwork and reutilization of everyday objects and materials, the affirmation of its large formats and the adoption of a contour, leading figurative and of more corrosive message. At the February’s exhibition, my invitation to the artist had been motivated by the glimpse of a set of his large canvases, which I found at a usual work space of mine (Fórum Cultural de Cerveira), which brought me the suffocation of a refugees’ camp, by the pile of bodies suggested in the composition, the dramatic intensity given by the color palette, and by the words that populated the immensity of painted area which, in the immediate, also led me to the best examples of Artur Bual‘s (1926- 1999) gestural painting.

Border painter, natural and resident at Monção, Ricardo de Campos has in his course other Bual’s brands, such as the taste for iconographic representation of Jesus Christ. Immediately, his painting calls for reflection on this world of walls and (new) intolerances that we found on our way to dissipation, in the wake of the horrors of the World Wars that, in the not too distant past, made us ashamed of being human.

In the material and immaterial dimensions of the contemporary appropriation’s language, religious iconography, in the classical way, does not present consensuses or, at the very least, adherents. For this new exhibition, in which we expand the device to the scale of the growth and plastic evolution of Ricardo de Campos, that is one of the points of artist: the one of the literal destruction of the icon, of the imaginary symbol of Christ, in a clear metaphor to the destruction of his example, in an analysis of faith or, simply, historical and geopolitical.

Mostly, art is about destruction and nostalgia. Generally, when you go to an exhibition, you can choose between hating the times that it represents and loving the images as they are here and now, or hating your time and feeling nostalgia for the time depicted. I think that documentary exhibitions are, in this sense, even more likely to induce you to hate your own time than a traditional exhibition. 2

In this sense, in “Appropriation, Accumulation and Annulment“, Ricardo de Campos abandoned the aesthetics representation of the neoexpressionist tendency and, in the concept differential, gets closer to model that, in a few notes, reminds us of Julião Sarmento himself (n.1948) and of Jean-Luc Godard‘s (n.1930) cinephile’s reflections influence on the condition of women in the society under construction. Returning to Danto:

There is a kind of feminist novel, for example, where a woman comes to an inner understanding or awareness of the meaning of her identity as a person and as a woman. The end of the story is this advent of self-consciousness. What happens after this point, what she does in the light of this knowledge, is her responsibility. 3

The change happens after the completion of the Masters in Contemporary Art. Creación e Investigación that attended at the Faculty of Fine Arts in Pontevedra (University of Vigo), evidence of the artist who joins to his virtues the courage to put himself in confrontation with the Academy and with the other’s gaze. Ricardo de Campos is a painter. It is in his art that one defines and develops, also as a social being. At the age of 40, this great solo exhibition, at the end of yet another phase of his academic career, is only proof that he will not cease to amaze us.

I do not know if we can consider this as a retrospective exhibition, since Ricardo de Campos is at the beginning of a journey and in the definition of a path. However, the exhibition of works, in which it diversifies scale, format and support and to which he joins nearly twenty works developed in partnership with other artists, exceeds one hundred and occupies the emblematic Vila das Artes space. Does it have any signs of Revolution in gear? One would say that it is not Art if, at the very least, it does not breathe and perspire Freedom. So it is.