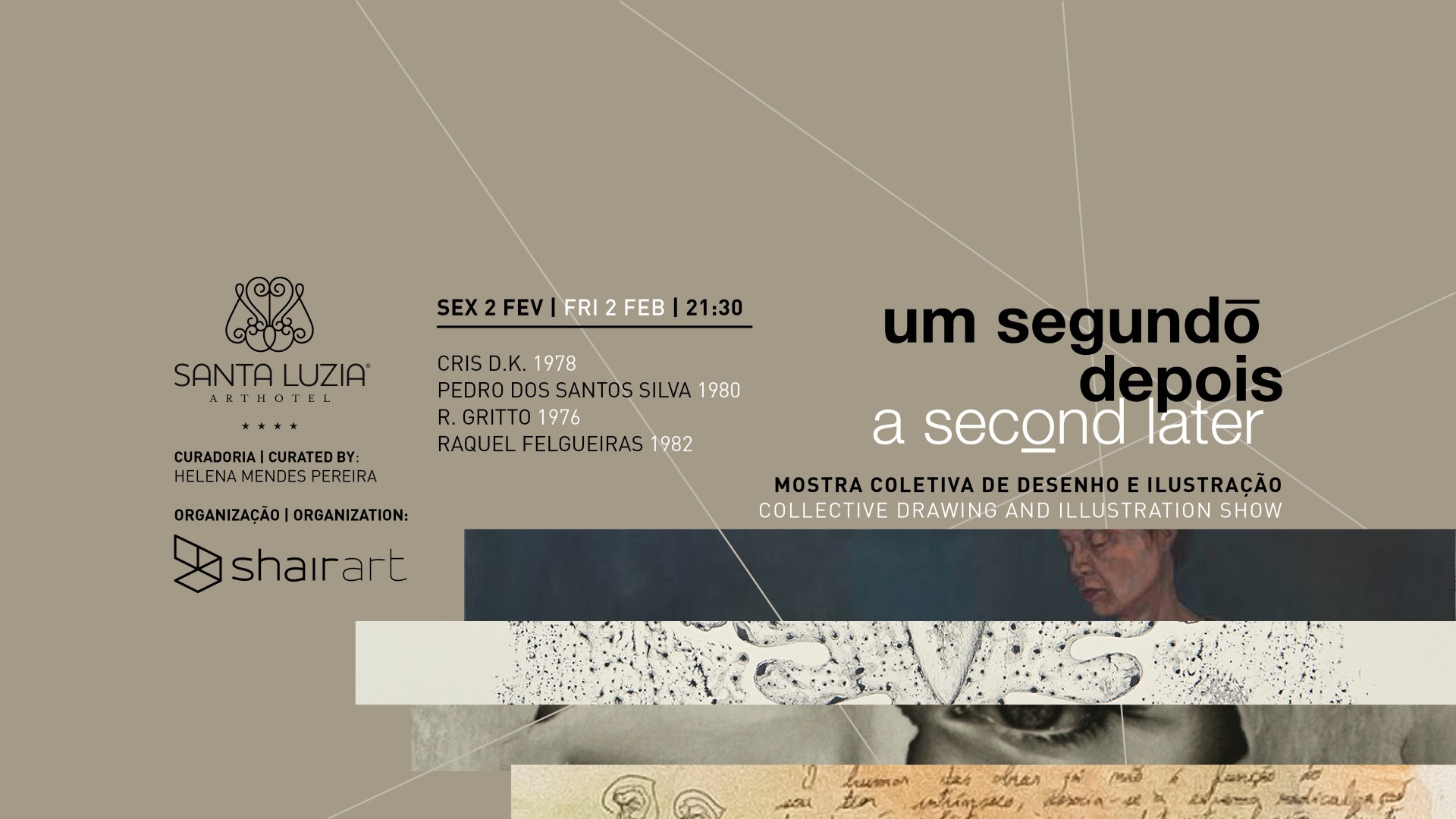 A SECOND LATER suggests the time of the missed opportunity, the break between the act and the contact. In the most common apprehension of the artistic disciplines’ domain, drawing and illustration (ignoring the primitivism of Art as a narrative of daily life and heroes perpetuation) appear to us, not rarely, as the before or parallel to the great History of Art. The contemporary, in its devices and essays, has gone the opposite way, valuing these disciplines in the purity of their gestures and in the possibilities of approaching the logics of skill assessment, if we will, of the creators. Drawing has the simplicity of the innate child gesture and illustration often takes advantage of the expressive and non-competitive relations, as well as the interdependencies between the text and the image. A SECOND LATER is the first of the collective shows of drawing and illustration that mark the partnership between shairart and Santa Luzia ArtHotel.

For this first moment, curated by Helena Mendes Pereira, a leading generation of artists in limbo is convened: they already add some lines to their curricula, but they are not yet at the unavoidable level. There they will arrive. From different languages ​​and registers, they share the evidence of the mastery of technique, the dexterity of the beautiful and the capacity of the message: Cris D.K. (n.1978), Pedro dos Santos Silva (n.1980), R. Gritto (n.1976) and Raquel Felgueiras (n.1982).

Santa Luzia ArtHotel opened its doors at the center of Guimarães on December 31, 2015, result of a project designed by Cerejeira Fontes Arquitetos’ office, which combines the maintenance of the nineteenth century door with the architecture of straight lines and new materials of our time. At first sight, Santa Luzia ArtHotel, as object, is an artwork. At second sight, it is the place where art happens in an intimate and subtle way. The vintage furniture of the first interior spaces leads us to the magical water mirror, turned into a small amphitheater, that makes us live the quietude, full of an impressive beauty, of this small paradise found in the Historic Center classified as a World Heritage by UNESCO.

The equipment’s offer in terms of hotel and restaurant is excellent but, more than that, Santa Luzia ArtHotel affirms itself as a project to support the original artistic creation, in any of its disciplines, beginning in music and ending in plastic and visual arts.

It is in this sense that the partnership with shairart, a platform for the dissemination of contemporary art, will invade Santa Luzia ArtHotel with successive collective drawing and illustration’s shows, as denounced and now affirmed. Promoting the contact between contemporary and public artistic production is the main goal of the challenge, shared in a good taste embrace, not only through the contemplative exercise of the above but, especially, through the singular actions of conversation with the creators and of merging with other disciplines.

The first exercise starts on February 2, Friday, from 9:30 p.m.. Talks at medium light are promised, as well as music in between, in the discovery of talent in due time to be seen at A SECOND LATER.