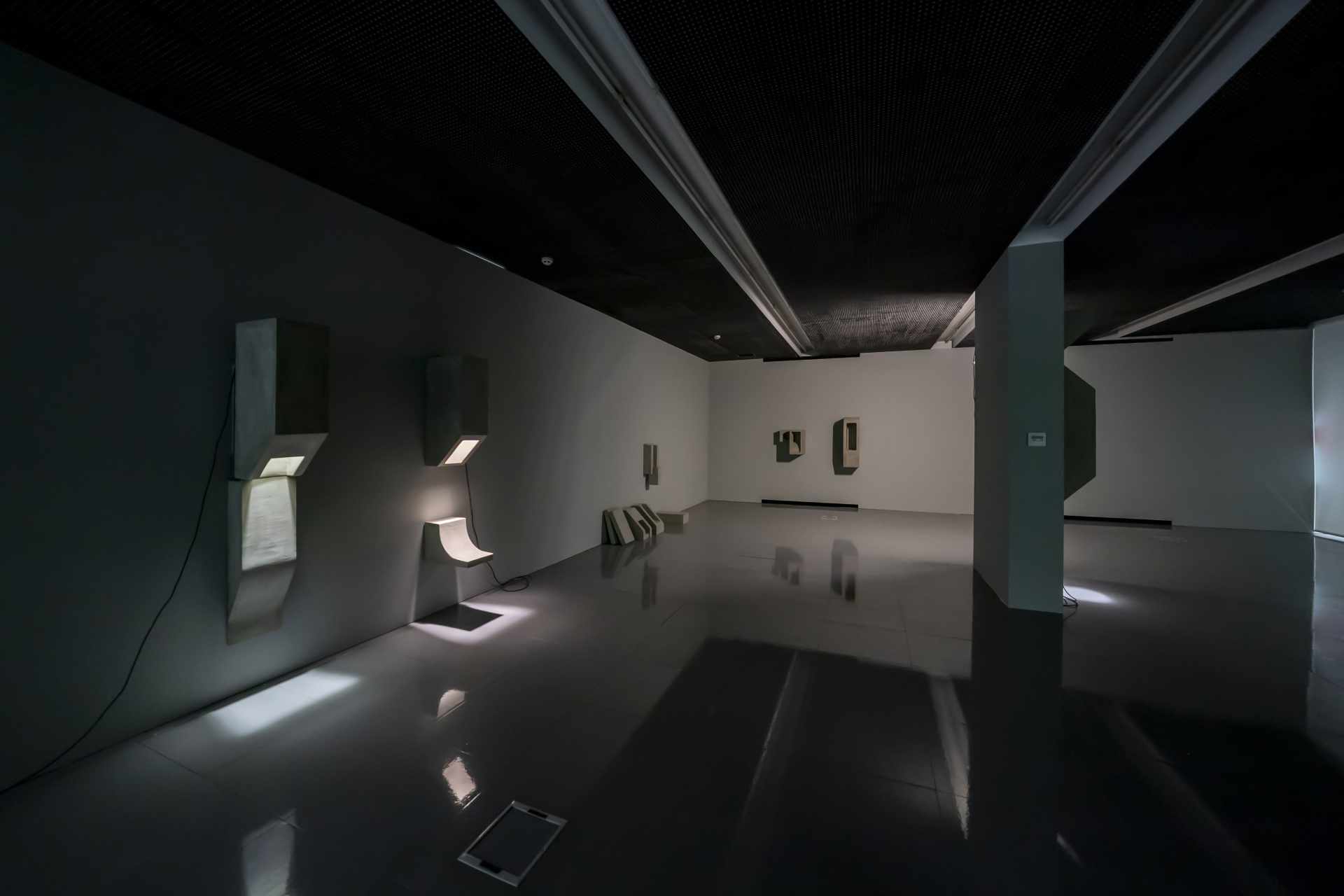 A set of cross-references brings me a coexistence of concepts (perhaps) inseparable from the work of João Dias (b.1983): boldness, intimacy, expansion, and excavation. I recall John Berger (1926-2017) and the “Ways of Seeing”1 revolution of 1972: a set of seven theoretical essays, echoed in a series of the same name on the BBC that proved a phenomenon of popularity with the public for the way it democratised the possibilities of apprehending the artwork.2 Berger believed that the gaze is not only physiological but rather cultural. Images are built to be looked at and this way of looking determines our way of understanding. In other words, according to the English art critic, how we perceive and react to images vary according to our experiences and our context. The same image can thus provide different perspectives and different meanings. There is no single, frontal gaze, but a multiple, syncopated gaze. Berger induces stories about the artistic objects, contextualizes them and, at the beginning of the 1970s, what he proposes is aligned with the urgency of literacy that is being discussed and with the emancipatory practices, in the relationship between the artwork and the viewer, that are being designed. References to João Dias, an artist with a degree in Fine Arts – Painting from the Faculty of Fine Arts of the University of Lisbon (2006), had come to me through the back door when I was preparing an exploratory visit to Viseu, the aim of which was to make contact with his creative class. And, that day, the discovery of his studio was reserved as twilight time. It has been a while, a long time, since my eyes landed on a body of work and a processual space so intimate and, at the same time, so organically close to the industrial processes that make my preferences so much in the framework of the artistic production of the 21st century. I had no doubt, and verbalised with witnesses, that I was in the presence of one of the most original artists of his generation. The record player started chanting inside my head and, from “Sunday Morning” to “European Son”, the 11 tracks ran non-stop as I activated my way of seeing and asked questions.

The Velvet Underground & Nico from 1967, with a cover by Andy Warhol (1928-1987), is one of those epiphanies that sum up a generation. The 1960s and 1970s are a special time for artistic practices in which the limits of art are questioned in a confluence of trends, movements, authors and even geographies. Warhol and other names of pop art, besides the critical praise to the consumer society and the idolatry to a set of personalities of mass culture, introduce the silk screen processes and the reproduction of the image of the artworks in the system, managing also to create a new possibility of palette that causes a straight cut with the mimetic colour. Colour, from the time of pop art, entered the realm of the imagination and became the symbol of a counterculture based on a kind of revolution for love and freedom. Arthur Danto (1924-2013) was perhaps the first philosopher and thinker on the art of our time who made me awaken to the magic of pop art. After reading him, I remembered an exhibition I had seen in 2010 at The Albertina Museum, in Vienna, Austria – “Cars by Andy Warhol” – which recovered a series for Mercedes Benz, the automobile brand symbol of a generation and which Janis Joplin (1943-1970) eternalised in a simple and ironic song: “Oh Lord, won’t you buy me a Mercedes Benz?”. From the Vienna exhibition, I remember that it corresponded to a reopening of the museum and that, for the first time, I fell in love with the so-called “exposed concrete” and the relationship it established with the pictorial vibrancy of Warhol’s works. The car and cement as symbols in our industrialised era, as reflections of the cosmopolitan city, painted by the colour of our culture made of crossbreeding and dreams. Convening sculpture, or in a wider field of the so-called expanded painting, what I discovered of the recent production of João Dias combines influences in the Anglo-Saxon neo-conceptual, of minimalism, with the colour of pop, in the forms that provoke this dialogue with the sense of the Polis where the landscape has gendered ramblings.

During the visit to the atelier, in Viseu, a space-time full of experimentation, technology and poetry of chaos, I returned (always with The Velvet Underground & Nico) to Ceuta, an autonomous city of Spain, located in the north of Africa, next to Morocco, and to its Public Library, the only project for cultural equipment, that I know of, that integrated an archaeological vestige from the 15th centuryinto its architecture, concretely an old Muslim house. The forms of a sculptural tendency by João Dias, which amplify the colour and light in their interior, intimate and Confucian space, have the beginning of that excavation in the drawing of the contemporary as if history related to the dialogue that the artist provokes, in his recent production, between the artwork of a site-specific tendency, and the architectures in combat. I thought that it could not have been by chance that that visit and discovery had taken on a late afternoon tone and I remembered Stig Dagerman (1923-1954):

It is impossible to know when twilight will fall, impossible to list all the cases in which consolation will be necessary. Life is not a problem that can be solved by dividing light by darkness or days by nights, but rather an unpredictable journey between places that do not exist. 3

Expanded painting, archaeological grid, sculptural apprehension, colour, light, poetry, industry, strength VS subtlety, architecture, and landscape, on a journey designed by an artist who, as he soon made me understand, connects with places, and seeks to interpret them with the curiosity of one who is an artist but acts beyond the scale of creation. João Dias has made a path, having held, since 2006, multiple exhibitions, which include, from the national geography, Lisbon, Porto and Viseu, and world-cities such as Munich, Berlin, Gdansk, Barcelona, Murcia, London, Paris, Los Angeles, San Francisco, and New York. Between 2008 and 2012 he lived in Berlin, as a result of being awarded an INOVART grant. His works are present in important collections such as the PLMJ Foundation, Edge Arts Collection, and the Multiples Collection of Carpe Diem. Since 2018, he is also Artistic Director of POLDRA – Public Sculpture Project Viseu.

The paths he chooses, accompany his life and the boldness with which he lives it. In Berlin, the basis of his work was drawing and, between his return to Lisbon and his first years in Viseu, painting occupied the outer space of action. He expanded into the third dimension and began, in the likely consequence of parallel challenges, to think about public space. We return, with Patricia Phillips, toan idea of John Berger’s about emancipation and popular participation:

At the moment that his expression, industrial in nature, but archaeological at the same time (in the sense that it hides, through the semiotics of colour and, sometimes, of light, a secret, a catharsis, and an emotional trampling), expands to the landscape, interferes with the buildings and the architectures, João Dias questions the public, far beyond the contemplative dimension of painting that made him believe that he was for Art halfway to the Olympus that belongs to him. In one of the projects he has in development, and which he had the courtesy to share with me, he approaches his role as mediator and dialogues with the History of Art, introducing elements of the multiple digital possibilities that are also of his time. I would call it boldness because, as a rule, we know more examples of artists who retreat from the third plane of creation to the second, for the commercial comfort that painting has. João Dias does the inverse path, he expands, never losing the intimate place of the blank sheet on which he draws in order to find himself. Why Viseu? Why swap Lisbon for Viseu after Berlin? For love. Boldness, I would reinforce. Roland Barthes (1915-1980) wrote:

Two powerful myths made us believe that love could and should be sublimated into aesthetic creation: the Socratic myth (love serves to “create a multitude of beautiful and magnificent speeches”) and the romantic myth (I will produce an immortal work by writing about my passion).

However, Werther, who previously drew very well, is unable to draw Carlota’s portrait (he can barely sketch her silhouette, which is precisely what has trapped him in her). “I lost… the sacred, life-giving force with which I created worlds around me.”5

But João Dias goes, as he said, towards Olympus, in the continuum of expansion, without losing the intimate place that summons us all and never ceasing to make us travel to immemorial times that archaeology returns to the present. There is something in their forms that is completely original, the rest is the path: the one already made and the one that lies ahead.

Find out more about the artist and his work at https://zet.gallery/artist/joao-dias-30178.